In 1957 the Okeene – Homestead area had a great flood. Fields were awash, fences were packed with debris, and everything was a mess. Our homestead farm was farmed so that the topsoil from adjourning farms washed into and practically filled two draws in our largest wheat field. It was so wet and the soil so loose we could not get across it with a plow without getting the old 41D John Deere tractor stuck.

Now, this 41D did not have a starter on it. You had to open a petcock on each of the two cylinders to let part of the compression out and spin a large flywheel on the side of the tractor to start it by hand. I was 11 years old and could not even move the flywheel, but it was my job to plow the fields.

My brother Pat was only 7 years old, but dad put him out in the field with me. Pat would pull me to bump start the John Deer with an 8N Ford Tractor with an electric starter. I would hook up to the plow and head to the field. Pat followed on the little Ford Tractor. While I plowed around the field, which took at least an hour, Pat would sit under the chinaberry trees and drink water. When I came around to the draws, I would stop, and Pat would drive the Little Ford tractor out and back up in front of me. We would drag the heavy log chain from the drawbar of the Ford tractor to the front axle of the John Deere and hook the two together in tandem. Then with both tractors, throttled wide open. We would race down the draw and across the silted in bottom as fast as we could. Plowing all the way. Up the other side, with Pat looking back like someone pulling a water skier to watch for my hand signals, we would coordinate a stop on top of the other side.

Then I would plow to the next silted-in draw, and the whole process would start over until, once again, we were up on top of solid ground. Then unhooked, I would plow around the entire field again, and Pat went back to sitting under the trees till I made it back around.

Dad was determined to plant those draws with that beautiful topsoil in wheat. Indeed we did, and it was the thickest and tallest wheat we ever raised.

This process went on for days. Dad took us to the field in the mornings, then went back to town to work at the Ford garage where he was shop, Forman. At noon mom brought food out to us, and dad came out during lunch, and he would drive the John Deere, plowing while Pat and I ate lunch.

We so looked forward to seeing them pull up in the pickup. Mom always brought a mason jar filled with hot soapy water and a washrag to clean our face and hands. After lunch on the pickup's tailgate, dad went back to work, mom went home, and Pat and I plowed again until dad came out after work. He would have eaten supper and would bring me a hamburger and malt from town. Mom would take Pat back to town with her, and dad and I would plow until it got too dark to see. With him now on the John Deere and me on Pat’s little Ford tractor.

All I could hear in my exhausted sleep at home in bed was that damn John Deer tractor going pop, pop, pop all night.

One day on the backside of the field, I killed the John Deere in

some black gumbo with the plow still in the ground. I tried to spin the flywheel, but there was no way I could get it started. I had to walk in the cultivated part of the field the three-quarters of a mile to where Pat was sitting. We drove the little Ford tractor out to the John Deere to see if we could re-start it. But with the plow in the ground, there was no way the little tractor could bump start it. And the presser of the clevis was to great to get the plow unhooked. Finally, we gave up.

We waited on dad as there were no cell phones in 1957. When he found us, he showed us how to take a large diameter bull rope and wrap it around the work wheel on the opposite side of the flywheel. Then we put the transmission in neutral. With the clutch pulled and the rope tied to the drawbar of the little Ford tractor, dad had us throttle up the John Deere just a little, and as Pat opened the throttle all the way on the Ford tractor, dad had him take off as fast as he could. The rope spun the John Deere motor to life.

I am in my mid 70’s now and have close to 150 students in my martial arts school. I look at my 7-year-old kids and think about Pat at 7 being out in the hot sun all day with me plowing. And I was only 11 years old at the time. I guess my takeaway is threefold. Work long and hard, do it now,

and you can always find a way because failure is not an option.

One more thing. I never did start that John Deere by spinning the flywheel by hand. When I got strong enough to spin it dad bored it out to 260 cubic inches and put aluminum pistons in it and a cold manifold. It melted the spark plugs every day until dad found some aircraft plugs that would stay in it. That thing had so much compression that even dad could no longer start it by hand. We had to pull it with the Ford tractor to start it from then on. We all thought we had a hot rod 41D.

We found the sales ticket where my grandfather Raymond Theosophist Outhier had given about $450.00 for the John Deere new. My brother Scott inherited it and sold it years ago for $1,200.00.

Instead of buying a new U-MM, dad rebuilt an old tractor. That out pulled any U-MM and even plowed alongside a John Deere 40-20 for many a year. 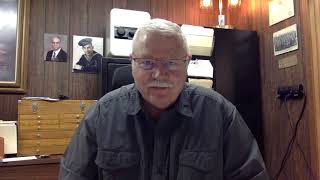